“In this great affliction that befell our wretched city all respect for lawful authority, human or divine, had been destroyed: those who should have seen that it was upheld were, like all the others, either dead or sick or with scarcely any subordinates left to perform their duties. So everyone did as they liked.” – Boccaccio

At the end of the 13th Century, Europe had undergone a long period of population growth, technological advancement and general prosperity (or at least security). Around 1300, the populations across Europe had reached a local maximum, and such a density would not be seen again for at least 4 centuries. The European achievement was about to be irrevocably undone. The High Middle Ages were over and what was to come would change the structure of the Occidental world forever. 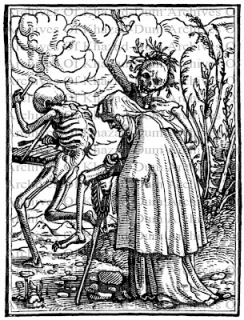 The Black Death or Great Morality that afflicted Europe in the middle of the 14th Century was not an isolated disaster, but was, rather, a climax of destruction that was bookended on either end by half a century of economic crisis, famine, disease, war and revolt. The great plague was preceded by famines, shortages and epidemics that had been brought on by poor weather, crop failures, and speculation in commodities. These disasters had already affected major spikes in mortality rates in certain places such as rural Essex, which lost as much as 15% of its population, or Ypres which suffered a 10% decline in its population as it gave in to starvation, disease, and want.[1]
The recession in population that began with famine and peaked with the Plague years  of 1347-1349 might not have been enough to permanently retard the growth or at least stasis of Europe in itself, but repeated epidemic breakouts of plague and other diseases, such as typhus and smallpox, would  derail any nascent recoveries and ensure that the population of Europe would suffer a precipitous decline over the next 7 decades. Demographic reconstructions of the period have estimated that Europe as a whole lost somewhere between 30 and 50% of its population to the various crises.[2]
Perhaps the most quantifiable consequences of the disasters besetting Europe in the 14th Century were those involving the economic sphere. Henry Knighton, a contemporary of the Great Mortality, writes that during the plague year in England “…. the price of everything was cheap, because of the fear of death; there were very few who took any care for their wealth, or for anything else. For a man could buy a horse for half a mark, which before was worth forty shillings, a large fat ox for four shillings, a cow for twelve pence….” He then continues that in the following year, due to manpower shortages, the wages of labor had begun to rise. “… one could not hire a reaper at a lower wage than eight pence with food, or a mower at less than twelve pence with food. Because of this, much grain rotted in the fields for lack of harvesting…” [3]
The famines and plagues had dramatically reduced the available labor pool, increased the wages of both the common and skilled laborer, and led the serf, tied to his land and unable to access the upward mobility present around him. into a state of dissatisfaction. In England laws were enacted to keep the price of wages at a status quo, but these rules were summarily ignored by the general populace and “The great landlords had to use ingenuity, and sometimes force, to maintain their customary levels of income from their estates.” [4]
In towns, abbeys, monasteries, and cities all over Europe, officials, clergy, and skilled labor sought to replenish its depleted resources by encouraging immigration from the rural areas, further exacerbating the displeasure of the serfdom, reducing the manpower available to the landed gentry, and leading to an inexorable upward spiral in labor and commodity prices.[5] In the ecclesiastical sphere, the high mortality rate led to the recruitment of younger and less experienced personnel in the years after the Black Death, and may have inadvertently given rise to popular heretical sects, like the Lollards, when the established church balked a paying higher wages for well educated university graduates. [6]
Try as they might, however, the powers of officialdom were unable to put the genie of upward mobility and yeomanship back in the bottle. In May of 1358, disaffected peasants and artisans in the Beauvais region in France, rose up against the nobility whom they also blamed for recent military defeats at the hands of the English. The rebellion quickly turned bloody and rebels sacked manors, castles and estates, killing any noblemen unfortunate enough to come under their power. [7] In 1381, a more organized and sustained revolt was let by Wat Tyler in Southeastern England. [8] Despite being ruthlessly put down by a disingenuous English crown, it was clear that from that point forward the lowest classes could no longer be taken for granted by the landed, aristocratic elite.
The Black Plague, and the subsequent population implosion, had left the nobility and the upper echelons of secular political power intact, but had forced these higher powers to address the strength and disquiet among the lower classes. In the religious sphere, the former hegemony of the monolithic Catholic church was weakened both from within and without. General dissatisfaction with luxury-loving clergy and inexperienced undereducated priests, as well as the splintering of churches into private members only chapels and parishes, would lead eventually to the Protestant Reformation in the coming centuries. But in the mean time, the church was determined to hold on to its privilege and power and so persecuted anyone who it saw as a threat, selling indulgences to the upper classes to fund its activities and Inquisitions. Finally, in the sphere of trade and production, the overall productivity of Europe was weakened while overseas trade had shrunk and now persisted primarily in the South of Europe, the very areas that would set out to conquer the New World in the coming century.

poetry is the language i speak to the world with

The House of Vines

A journey into language, books, and print.

Journey to Healing and Recovery

MAL-ART is about hitting that sweet, sweet spot as well as a sour nerve or two--- POPPED BUBBLEGUM, HARDCORE JAWBREAKERS & WORDS FROM ME TO YOU

The Life of A Mentally Ill Writer

Just a place to put my thoughts on arranged words into words.

imagination experiments of a stardust yogini